Tucked away behind a clump of hills on Hwy. 51 a couple miles north of the Panola-Tate County line is a two-acre field of dirt and grass where something remarkable is happening.

There, Batesville native Chris McMinn has built the baseball program at Magnolia Heights School, a small private academy, into a powerhouse in Mississippi and further, shaping and molding boys into men the same way he learned from coaches and teachers in his hometown.

“Ninety-nine percent of who I am, I would say, came from growing up in Batesville and the South Panola school system,” McMinn says. “From the time I could walk I was in the gym and on the field at South Panola and it completely shaped me for what I’m doing now.”

What he’s doing now is amazing. In just 14 years as head coach McMinn has led the Chiefs to eight state championships, including this season’s come-from-behind win over Simpson Academy in the finals.

It was during that series in May the coach reached a milestone few high school coaches approach – his 400th career win. “That was one was special,” he says, relaxing at a team pool party were players and families savored the season’s success. “The first one, and then the 37-0 year, and this one. This one because it was such a struggle and we were behind. It made it better for the kids and me too, I guess.”

Coach Mac took over the Magnolia Heights program from his old junior college coach, Jim Miles, who had begun to build a strong baseball program. “That first year we were 29-3 and it was the players at that point. I was still trying to figure things out. But most of them were seniors so the next year was a down year, but it was important because it was when we started the junior high program and I could do what I wanted. We rebuilt it all at one time that fall,” he says.

He can only remember a few of the 401 games he has won at Magnolia Heights, but he remembers the first one. “Yeah, that one I won’t forget,” he laughs. “It was late February against Memphis Homeschool and I don’t know what the score was but I remember it was a one-run game. They had a kid, Tyler Whitney, who signed with Mississippi State who pitched against us.”

McMinn learned baseball on his father’s knee and was one of Batesville’s best high school players ever. His 1992 senior team at South Panola was one of the winningest  the Tigers have fielded in the past 40 years. Chris Ware, Shane Faulkner, Joey Hopper, and Shane Ragon were teammates and his dad, local coaching legend Ronald “Runt” McMinn, was the head coach. Several players off that district winning team continued their careers in college, and young Chris went to Northwest Mississippi Community College to play for Coach Miles.

He graduated with a degree in secondary education, and returned to Batesville for a semester of practice teaching, joining Tigers head coach Robert Lightsey’s staff as an assistant.

McMinn grew up watching his dad coach (he had retired after Chris’ senior year) and was strongly considering a career in teaching and coaching. That spring semester at South Panola cemented the decision.

“We had a great year with great kids. We had Nathan Boudin, Chris Burnett, Josh Bright, Jeff Walls, Brandon Kizer, and a lot more good guys. It was my first experience at coaching and I knew at that point that was what I wanted to go. I was so glad Coach Lightsey let me do my student teaching and coaching at South Panola.”

There were stops in public schools in Horn Lake and Southaven, coaching girls basketball and assisting in baseball, before the head coach position came up at Magnolia Heights and he got the offer to run the program. He was close to Coach Miles and had roomed with his son at Delta State, just as Runt McMinn had roomed with Miles when they were Statesmen two decades before, and knew the program was already strong.

“It was a hard decision at first because it was scary to be leaving the public school system with the better pay and the retirement system, but when I saw what Magnolia Heights was doing for my kids, I realized it was the best thing for me and my family,” he says. “The support of Dr. (Marvin) Lishman and our board has always been the best and it’s meant a lot to the program.”

Over the years Coach Mac has turned down several offers from larger schools, some of them fairly tempting. A few years ago he told DeSoto Central High School “no, thank you” when the program was blossoming into a nationally-recognized baseball school. He has no regrets, and he doesn’t wonder how far his coaching career might be in a public school setting.

“The way I look it at we are already beating the top teams public or private. I think at one point this season we played four of the top teams in Tennessee. We played teams from six or seven states. So when we are able to compete at that level in these big tournaments, I don’t have any doubt we’re doing the right thing,” he says.

“Our goal isn’t about wins, it’s about winning the last game. We have a tough schedule and we got beat by some really good teams this year, but that’s what prepares us for those one-run games late in the season.”

Late this season looked bleak. The Chiefs had rolled through the regular season, cruised through the playoffs, and were set to dispatch Simpson Academy in short order, and get Coach Mac his 400th win at the same time.

Those plans were disrupted quickly in the final championship series. The Chief took a beating at home in the opening game, playing maybe their worst game all season. McMinn’s star shortstop made three errors. His best hitters struck out. Players got picked off. It was a terrible game, and meant the Chiefs would have to travel to Simpson County where they would have to win one game to stay alive, and two for a championship.

Coach Mac was unfazed. He gathered the team and reminded everyone that a team on a 25 game winning streak is due a loss. Bad luck, he said. Then he went over a few mistakes the players had made and hurried off to his 10-year-old son’s practice where he is an assistant coach.

“We’ll get them down there,” he said.

And they did. The star shortstop, a sophomore already committed to BYU, played flawlessly and smashed a long homer. Another team leader belted two. The Chiefs had a great night, getting their coach his 400th win, and then capturing the title in the second game. Fittingly, it was an eighth grader Coach Mac called on to pitch in the final game – a player that has unlimited upside and is already drawing the attention of college coaches and pro scouts.

“No matter who you are on this team the players all have a role and they understand that. Some of them in the dugout and some on the field, but we’re all a team, and they know that. We treat them all the same. Everybody gets the same number of ground balls and the same number of swings in batting practice. Some of the guys that will never play and know it are the best teammates,” McMinn says.

It’s the wedding invitations, and the birth announcements, that come from former players – some who never played on the field, but were on Coach Mac’s team – that keeps McMinn steadfast in his approach to baseball and to managing young men.

His guys are rowdy, but never disrespectful. They tease, but never taunt. They love baseball and know the game better than most adults.

Coach Mac’s bench is almost as enjoyable to watch as the players on the field. No one sits. They chant. They laugh. They clap. They bang on buckets. They sing a teammate’s favorite song when he’s batting. They know and understand the game on their coach’s level and are as intimidating as they are encouraging. (Example: Once this season when an opposing coach, an older man with a full white beard, went to the mound to meet with a struggling pitcher, the whole bench immediately broke into gleeful singing of “here comes Santa Claus, here comes Santa Claus…”)

Teams are a reflection of the coach, and it’s no different with Magnolia Heights baseball. The players are fearless on the field, willing to play any team at any time. “That’s the thing with Coach Mac, he’s not afraid to lose,” an assistant coach says.

“I don’t like to lose, I don’t like it all,” McMinn insists. “But it makes me realize what we need to do to get better. The games we lost this year, we were better the next game. We do a lot of competition in practice and the players really get into it. We’ve had to separate them in practice, but it helps us instill in our kids that we have to be tougher than the other guy and I think that gives us an opportunity to compete no matter who we are playing.”

And keep playing is what the baseball Chiefs will do. And Coach Mac plans to keep teaching the game and training his boys on the field behind those hills off the highway. The wins will continue to pile up, but that doesn’t mean much to the veteran coach who learned his values on the playgrounds and ball fields of Batesville, listening to the advice of his parents, his teachers, and his coaches.

“Batesville will always be my hometown and most of my friends still live there,” McMinn says. “I’ve had a couple of chances to go back but everybody knows it’s hard to go back to your home in this business.”

“I’m happy here. Magnolia Heights to me is like old school education. It’s what I remember growing up with smaller classrooms and more teacher involvement with each student,” he says. “The 80s and 90s seems like a long time ago now, but seeing how much those teachers and coaches at South Panola cared about us back then was how I learned why and how to do that now.” 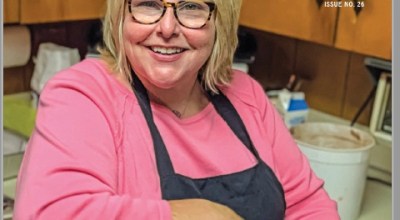 Preview our Batesville & Beyond Fall/Holiday magazine

Copelands reflect on four decades of business and customers

Shepherds aren’t allowed to use the glue gun for costumes

Shepherds aren’t allowed to use the glue gun for…