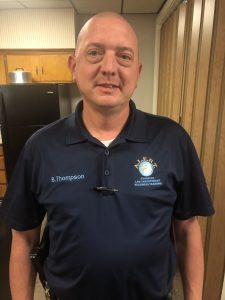 ‘We will be riding and looking’ for problem properties, Berryhill said

Batesville city aldermen have approved the hiring of Barry Thompson as a full-time law enforcement officer for the Code Office. Thompson is a veteran officer, most recently working as an investigator in former Sheriff Dennis Darby’s administration.

Code Office administrator Andy Berryhill introduced Thompson at Tuesday’s meeting of the Mayor and Board of Aldermen. He said the addition of a certified officer will speed up the process of identifying properties in violation of city ordinances, and having those areas cleaned or issuing fines and court notices when property owners fail to comply.

“We are going to be riding and looking,” Berryhill said. “We are trying to transition code enforcement from reactive to proactive in the city.”

“Hallelujah,” said Aldermen Stan Harrison, who in recent years has pushed other city officials to expand the office of code enforcement in an effort to reduce visible trash and other eyesore at city properties.

Berryhill said Thompson has already begun writing tickets to property owners who have been given warnings in recent months, and contacting those who have new violations. The standard procedure will be to give verbal warnings on the first visit and issue citations seven days later if a problem is not corrected.

The Code Office has a wide range of issues under its jurisdiction besides the enforcement of building codes for new construction and rental properties. City ordinances cover height of grass and bushes, debris visible from the street, the condition of roofs and exterior siding on structures, and a bevy of other standards for both residential and commercial properties.