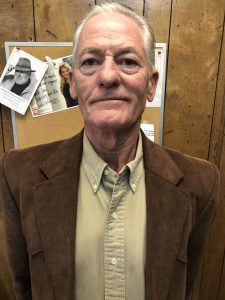 Former Panola County Sheriff’s Department investigator Terry Smith was appointed to fill the post of Constable for the Southern District (District 2) at Monday’s meeting of the board of supervisors.

Effective Jan.13, Smith will wear badge C3, the badge numbered C2 having been retired by the board the week after Raye Hawkins, the longtime wearer, was killed Dec. 12 while assisting Batesville police trying to stop a truck stolen from Tallahatchie County.

“Raye was my first cousin so it’s an honor to fill his position and I look forward to serving in the same professional manner he did,” Smith said. “I thank the board and I will serve the people of Panola County the same way I did for over 20 years.”

Smith began his law enforcement career with the Batesville Police Department in 1998 and transferred to the Sheriff’s Office in 2006. He had announced his retirement late last year, but said he was glad to fill the post.

Smith said he looks forward to working with both the Sheriff’s Office and Batesville Police in the execution of his duties.

In other supervisor appointments from Monday’s meeting at the Sardis Courthouse, the following were approved unanimously: