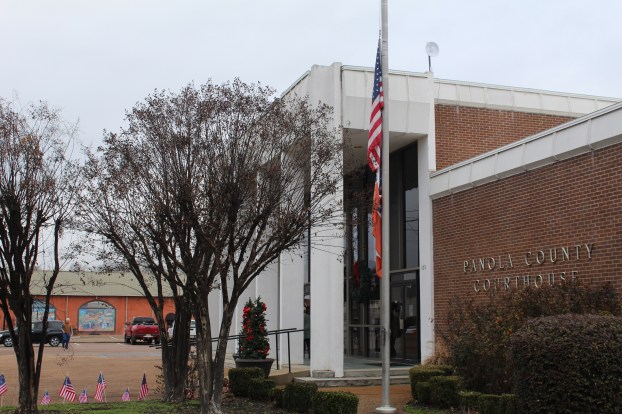 Hundreds of law enforcement officers representing agencies from across the state and nation have begun arriving in Batesville for Tuesday’s visitation and Wednesday’s funeral for Panola County Constable Raye Hawkins, who was killed in the line of duty Dec. 12.

Batesville Police Chief Jimmy McCloud met Monday with representatives from a number of departments to coordinate Panola County’s part in honoring Hawkins, 58. He died after a head-on crash with a stolen vehicle while participating in a multi-agency effort to stop a speeding truck driven by two teens.

Hawkins was an elected official, and worked for the citizens of Panola County, in conjunction with local law enforcement. Because a constable’s office is a part of all law enforcement departments, and not under a specific agency, the task of coordinating the various officers wanting to take part in the services was a multi-agency effort headed by Batesville Police.

Hawkins’s son, Wesley, is an officer for the Batesville Police Department.

Full details were still being discussed at press time, but McCloud offered some of the preliminary plans for citizens wanting to show their respect for the slain officer.

Beginning promptly at 5 p.m. today, uniformed officers from different agencies will participate in the customary Casket Watch for the public visitation. Officers will stand in full salute at the head and the foot of Hawkins’ casket at First Baptist Church of Batesville as mourners pass.

Officers will maintain the honorary posts until 9 p.m. at the end of the public visitation period. Shortly afterwards, McCloud said local police will shut down Panola Avenue and allow officers from numerous agencies an opportunity to put their vehicles into a caravan that will drive slowly to Wells Funeral Home with the blue lights flashing.

The Sea of Blue route will be from Panola Avenue to Eureka to Hwy. 6 where the caravan will turn east and make its way through Batesville proper to the I-55 interchange. The cars will get on I-55 north and proceed to the North Batesville exit where police will exit onto Hwy. 315 and go south to the funeral home.

McCloud said citizens wanting to watch the Sea of Blue and pay respects as it passes should remember to be extra cautious on roadways. He said the parking lots of the Church of Christ, First Security Bank, and the shopping centers on Hwy. 6 would be good places to park and safely observe the ceremony.

The Oxford Police Department has a trained Honor Guard and has volunteered to take part in the funeral services tomorrow. Those officers will serve are the pallbearers and will perform the traditional folding of the American Flag and official presentation to the family.

Officers from Shelby County, Tenn., who are the Bagpipe Division, will play Military Taps for Constable Hawkins at Antioch Cemetery.

McCloud also said representatives of the The Honor Network arrived in Batesville Sunday and will display The U.S. Honor Flag at the head of Hawkins’ casket during the visitation and services.

The U.S. Honor Flag is not the flag that will be folded and given the family, but a traveling flag that has logged more than seven million miles to be displayed at memorial services for officers killed in the line of duty and servicemen who fell in battle. See accompanying article for more information about The U.S. Honor Flag.

The teens driving the stolen 2018 Chevrolet Colorado were fleeing a Tallahatchie County deputy who had passed them on Hwy. 35, turned around and began to pursue. Local police and deputies were positioned inside the city limits on Hwy. 35 as the two entered Batesville at a high rate of speed.

Hawkins was in Batesville when the report of a stolen vehicle heading to Batesville was received about 2:10 p.m., and went to Hwy. 35, about where the short Compress Rd. meets the highway, just off Hwy. 6W where the overhead bridge is located.

Timmy Mitchell, owner of Mitchell’s Repair Shop in Charleston, told The Sun-Sentinel that his wife was in the office and witnessed the Colorado pickup, their vehicle, being stolen from in front of their business on South Franklin Street and reported the crime.

“There really wasn’t a chase,” District Attorney John Champion said at a press conference held that night to update media and announce the charges for the arrested youth. He said the deputy “turned around and initiated his blue lights, but by the time he did that, the vehicle was way gone in front of him.”

Champion said the stolen truck was traveling at a high rate of speed when it came upon Hawkins’ car.

“The speed we believe the vehicle was going, there was nothing [Hawkins] could do, and they crashed right into him … crushed and mangled his vehicle and he died instantly,” he said.

Champion added that the pursuing Tallahatchie County sheriff’s deputy “was probably close to a mile behind when the actual collision took place.” The wreck happened about 2:18 p.m.

Champion said Darion Dogan, 16, and Johnathan Taylor, 15, both from the Charleston area, have been charged with felony murder. The sentence carries a sentence of life imprisonment.

He said Dogan and Taylor, neither of whom were hurt in the collision, were informed of the seriousness of the charges against them when they were interviewed at the Panola County Jail.  “Do they understand the full ramifications of it? I have no clue.”

Champion took the opportunity of the press conference to lament the high rate of crimes committed by juveniles.

“You see so much of this happen when these young kids, in my opinion, don’t care or don’t understand the value of human life. … don’t have an understanding of what human life really is,” he said.  “I wish I had an answer to it. I wish I understood it.”

The teens are being held in a juvenile facility in DeSoto County. They will have an initial appearance before a local judge this week.

20th anniversary of annual “Shoot for the Heart”

At a recent ceremony honoring those who have endowed scholarships at Northwest Mississippi Community College, a plaque of appreciation was... read more