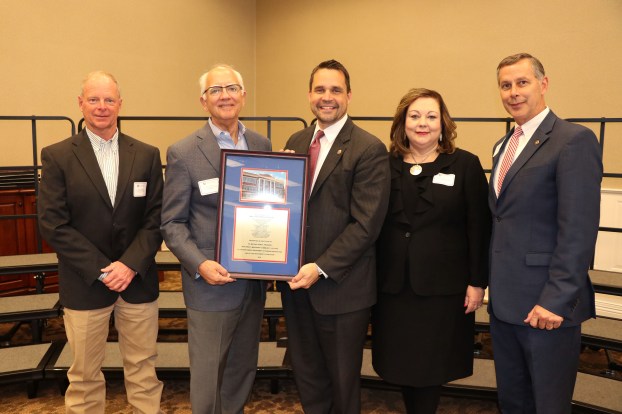 20th anniversary of annual “Shoot for the Heart”

At a recent ceremony honoring those who have endowed scholarships at Northwest Mississippi Community College, a plaque of appreciation was presented by Northwest President, Dr. Michael J. Heindl (center) to Tom Pittman, president and CEO of the Community of Foundation of Northwest Mississippi to commemorate the 20th anniversary of the annual “Shoot for the Heart” event. Shoot for the Heart, a sporting clay tournament, was started in 1999 by Keith Wilson, who had major cardiac surgery in Nashville. Since that time, the tournament has raised over $3 million. In 2011, Wilson moved to Mississippi and with the help of the Community Foundation of Northwest Mississippi, chose the Northwest Nursing Department as a new recipient of this fundraiser. Since 2011, the fundraiser has given $340,500 to the Nursing Department. From these funds, six endowments have been established, and beginning with the 2019-20 academic year, eight additional endowed scholarships were established. Pictured are (from left) Perrin Caldwell, Foundation board member, Pittman, Dr. Heindl, Dr. Denise Bynum, director of Nursing Instruction and Keith Fulcher, executive vice president, Community Foundation of Northwest Mississippi. (Julie Bauer) ​