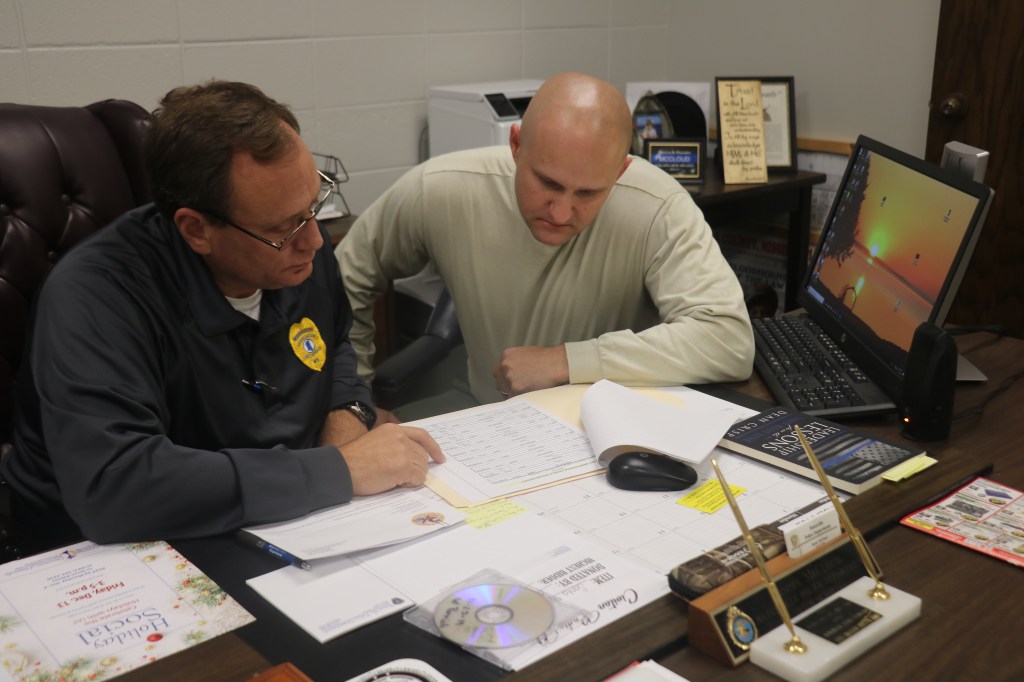 The changing of administrations in U.S. Presidential politics every four, or eight, years is a closely-watched procedure guided by tradition and strict protocol. To a lesser degree, there are rules and ways a new state governor assumes control of office, and teams of assistants generally work out the necessary details.

On the county level, though, there are no written rules or books of protocol to shepherd incoming administrations other than simple state statutes that govern when candidates who won seats in November are to take office. By law, the newly-elected officials take office January 1 of the following year.

Here, there are four new office holders, the main being Sheriff-elect Shane Phelps. That department is the largest in the county and the Sheriff is the highest-ranking county official.

There will also be a new Tax Assessor/Collector, Rev. O’dell Draper, in January. He has already attended training sessions required for that position, and is presumably ready to take over that office the first business day of the new year.

Also taking office Jan. 1 will be Earl Burdette, who won the District 2 supervisor race, and Chad Weaver, the new supervisor for District 4. They, also, will have to complete courses designed for first-time supervisors, mostly to become familiar with state purchasing and procedure laws.

And while there are no official Panola County steps or timelines that govern the transition of power in the Sheriff’s Department, the way that transition will play out is becoming a little clearer as the end of the year approaches.

For now, county plans are to have an official swearing in ceremony for Phelps, Draper, Burdette, and Weaver on Friday, Dec 27, at the Batesville Courthouse. In that short event, the new office holders will swear their allegiance to Panola County and the State of Mississippi. Those swearing-ins are mostly for the benefit of family and friends who want to witness the official oaths being taken.

Of those to be sworn, only Phelps is tasked with preparing his office to be fully functional once the clock strikes midnight Dec. 31. Combine that responsibility with the understanding that New Year’s Eve is generally one of the busiest nights of the year for law enforcement agencies everywhere, and Phelps knows his first hours on the job will be daunting.

“I’ve been trying to make sure that me and my team are completely ready at one minute after twelve on January the first and I think we have most of the details worked out,” Phelps said. “I have some really good people helping to get things ready for the Sheriff’s Department to get to work.”

As of this week, there have been 16 resignations at the Sheriff’s Department, all effective Dec. 31. Several of those are deputies and other support staff who had planned to retire months ago, but some are deputies who do not want to work for the new sheriff, or believe they will not be a part of the staff when Phelps takes over the department.

Phelps said that is not unusual when a new sheriff takes over, and he has already had conversations with other law enforcement officers who intend to apply for open deputy positions.

He has also had meetings with other state and federal agencies, including the U.S. Marshals office in preparation for his new post.

Phelps said two representatives from his administration will meet with current Sheriff’s Department officials Dec. 19 and 20 to take a complete inventory of all equipment and supplies at the department and at the county jail, which he will also oversee.

Because he will take the oath of office on Dec. 27 there will be no action necessary once the year 2019 has expired.

Sometime in the late afternoon of Dec. 31 Phelps and his top assistants will begin collecting keys to department vehicles, and start patrolling the county and answering calls after midnight.

Batesville Police Chief Jimmy McCloud has agreed to provide several officers from his department to give assistance to the new sheriff on Jan. 2, 2020, when he is expected to have all of that agency’s employees together for an initial meeting.

McCloud’s officers will be deputized for a few hours the morning of Jan. 2 and will cover the county while Phelps conducts that first meeting.

The first meeting of the new Board of Supervisors will be Jan. 6 with Burdette and Weaver being seated. Phelps is also expected to make a full report to the supervisors at that time, and be prepared to answer any questions they may have about the Sheriff’s Department.