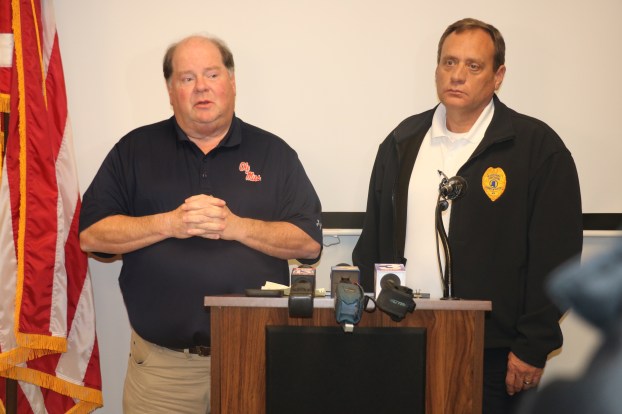 Champion says two teens have been charged with Felony Murder

DA John Champion and Batesville Police Department Chief Jimmy McCloud spoke to the media tonight after this afternoon’s tragic car crash that took the life of Constable Raye Hawkins in the line of duty.

District Attorney John Champion announced tonight that two teenagers from the Charleston area have been charged with Felony Murder after the stolen vehicle they were driving crashed head-on into Panola County Constable Raye Hawkins’ car, killing him instantly.

Darion Dagon, 16, and Johnathan Taylor, 15, were charged at the Panola County Jail . They were apprehended a few minutes after the crash. They had left the scene of the crash, but officers on the scene captured them quickly.

Champion confirmed that neither teen was seriously injured in the accident. They were to be checked by medical professionals at the Panola Jail Thursday night, and were then scheduled to be transported to the DeSoto County Jail.

This is a developing story and additional information will be posted.

Murphree is recipient of Book of Golden Deeds Award

Pictured with Scootie Murphree at the presentation of the Books of Golden Deeds Award is Willa Ales, who taught Murphree... read more