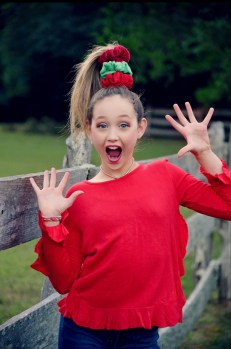 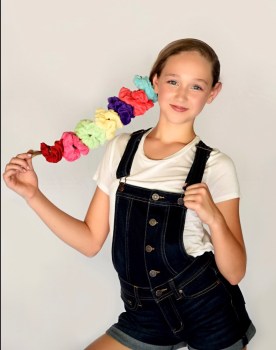 Cardin Elliott says the feel of the scrunchies is amazing 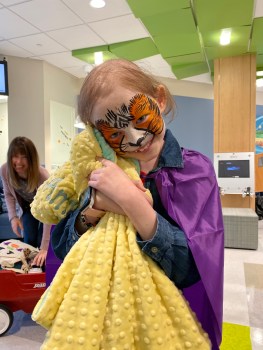 Amris from Atlanta is a patient at St. Jude and got her Flub blanket last week 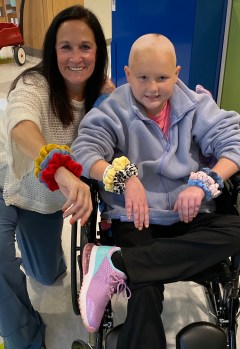 Taylor Barton (left) and Brinley Locke of Petals and Beaus with Sally Simmerman and Kamile Rudd with her Flub blanket.

Batesville woman has heart for children of St. Jude

Sally Simmerman wants to make every child at St. Jude’s a blanket – one scrunchie at a time.

Confused? Keep reading. It’s all for a good cause and is already bringing smiles and squeals of joy at the children’s research hospital in Memphis.

Flubs are the blankets that Simmerman has been making and selling all over North Mississippi for 15 years. Almost every family in Batesville has a Flub  – there are a few knock-offs but all genuine Flubs have the brand monogram – and the creator of the super soft blankets has sold thousands, many to the same families who pass them down and order a new one.

Through the years Simmerman has also made hundreds of special Flubs for people suffering dreaded disease or enduring tragic life events. As much as small business, Flubs are a ministry for Simmerman, and her long-suffering husband Stacy.

“He keeps telling me that I can’t stay up to four in the morning making Flubs, so I try to stop at two,” Simmerman said. “Flubs is my way of helping people and when I started this for the precious children at St. Jude I knew it was more than I could do on my own.”

So, she has partnered with Petals and Beaus, a popular children’s boutique on the Batesville Square, to sell scrunchies – the colorful elastic-type hair bands that girls (and some boys) use for ponytails and similar hairstyles.

Scrunchies of all sorts are sold at many locations, but Simmerman has already seen that hers – made from the special material that makes Flubs so popular – are well received because of their softness and design. “They don’t leave creases in your hair, and girls like that,” she explained.

Demand for Flub blankets (they come in small, medium, and large)  kept Simmerman busy for so many years, she never considered making other products. The expense of making so many Flubs for St. Jude forced her to think of a way to fund her mission.

“I started doing scrunchies because I can make $2.50 on each one and that adds up,” she said. “We need to sell about 80 scrunchies to make each Flub, and so far they have been selling fast. When people find out what the scrunchie sales are going for they usually buy more than they need. But, you can’t ever have too many scrunchies anyway.”

The Flub material – luxuriously soft – have given scrunchies new uses, too. Kids like wearing them on their wrists and ankles because the soft feel and soothing.

Flubs are made exclusively from minky dot, an expensive material that can best be described as velvety velour.

Two local children have recently received Flubs and both keep them close, their parents say.

“She loves it because it’s so soft and because it was made special for her. Her color and her name and she won’t hardly let me touch it,” said her mother, Patrice Rudd. “I hope everyone helps Mrs. Simmerman make those blankets for all those other children, because I know that it will be just like my baby’s is for her.”

“If Kamile is in the room, that blanket has to be in there, too,” she said.

Simmerman said she was filled with emotion on a recent trip to St. Jude when she took another Batesville youngster, nine-year-old Caitlyn Garner, her blanket. Caitlyn’s plight has captured the collective heart of the Batesville community with her courageous fight with a brain tumor that has included chemotherapy treatments and many nights of hospital stays.

It was Caitlyn who asked Simmerman to monogram her favorite Bible verse (Psalm 56:3) on each of the blankets made for St. Jude. The few blankets that have already made their way to young patients all have Caitlyn’s verse and have been a huge hit with the children.

“Their little faces just light up and the first thing they do is rub it and squeeze it,” she said. “Caitlyn and I gave one to a girl this week and she was laughing and holding it tight while she was headed down the hall to get a blood transfusion.”

“It breaks my heart, but it’s why I make Flubs until four in the morning sometimes,” Simmerman said.

Visit Petals and Beaus in Batesville, or contact Simmerman directly through Facebook or by phone (662-934-0033) to order scrunchies or help fund blankets for the children of St. Jude.