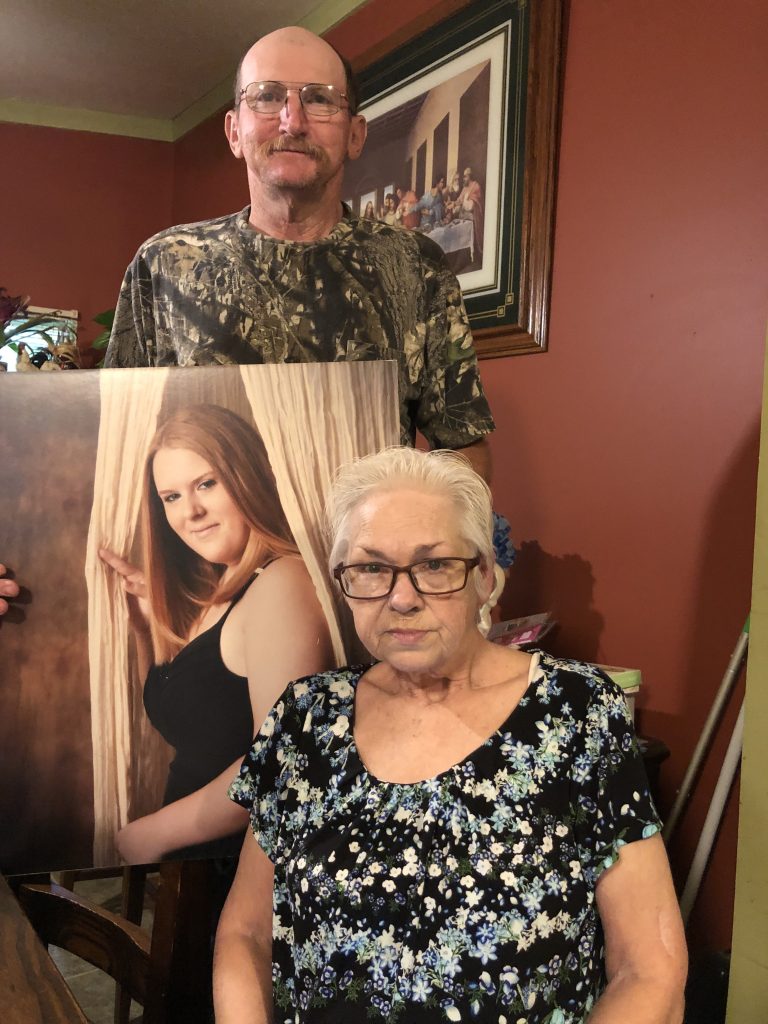 Tony and Mary Katherine Wright with a canvas photo of their daughter Mary Elizabeth Wright.

A mother who lost her daughter to a drug overdose does not want another parent to go through what she has been through the last year.

Elizabeth’s situation was different. She was an addict, but beat it once, then twice, but the third time was a fatal sentence for her. The official cause of death was an overdose from morphine and valium.

It did not see as if life wanted Elizabeth drug free, according to her mother. In August 2016, Elizabeth was cooking chicken tenders and fries when she spilled hot grease from her stomach to her feet.

Elizabeth suffered third degree burns and was in the burn unit in Memphis for more than a month where she was administered high-powered pain killers which kick-started her addiction for the third time. She had 570 plus stitches on her foot, trying to keep toes attached.

Although the family informed medical personnel that Elizabeth was a recovering addict, she was in too much pain to withhold the drugs, and thus started the beginning of the end for her.

Elizabeth had enjoyed Halloween with her family, though she could not go outside where they were grilling.

She contracted strep throat a week before she died, the Friday after Thanksgiving. Her boyfriend found her dead the morning of Nov. 30.

Since then, Katherine and her family have struggled to maintain a life without the light that was Elizabeth. The family asked to share her story and efforts to overcome her drug addiction so other parents know what to look for.

Life for Elizabeth was pretty stable, Katherine said, until her senior year at South Panola High School. Two days before she was scheduled to take her formal senior portraits, she was raped, her mother said.

With tears streaming down her face, Katherine recounted that fateful night when Elizabeth called and would only talk to her father and they raced to the house where she was.

Her attacker was not prosecuted because Elizabeth refused to sign papers and he was released,  although Katherine begged her daughter to do otherwise.

Katherine said Elizabeth was given opioid pills by a close family friend when she complained for a headache. She became hooked, and the supplier eventually demanded sex for the pills.

“I didn’t think anything was wrong with Elizabeth being with this person,” Katherine said. It was only after her daughter began taking many kinds of pills and and steal her cancer’s medicine she realized the extent of the problem

In 2016 Elizabeth checked into rehab for pain medicine. In 2017 she had gall bladder surgery and was sent her home with more pain medicine.

She went back to school, but was always asking for money ranging from $100 to $200, said Katherine.

In early 2018, blood clots were found in her legs after she kept complaining of pain. She was airlifted to Memphis because the clot was traveling to her heart.

“Scared me to death. That was the beginning of the end of her trying to stop drugs.  I told them to tell them she had a drug problem before they sent her back with a load of drugs,” Katherine said.

At the time of her accidental burning, Elizabeth was completely off pills, according to Katherine. She had a boyfriend and they were talking about marriage and children. She did have cravings, but he was able to talk her out of pills and find other activities to occupy her.

The hospital gave Elizabeth medication to bring home with her. “She still hurt but she didn’t ask for anything stronger. I knew then she was really about got it beat. Because that would have been the perfect reason to go back,” Katherine said.

Katherine relayed a conversation she and Elizabeth had. “She talked to me a lot and she would want me to pray. I would tell her she could pray just as well as I can. God listens to you as well as he listens to me.  She said, ‘You know how to pray.’ I said, ‘There is no certain way to pray.’”

As they went through their many first holidays without Elizabeth, they learned to live life without her.

The advice Katherine wants to give to family members dealing with someone with addiction is to watch who their friends are. Elizabeth had friends who did not do drugs but they would get drugs for her. “They were supposed to be her friends,” Katherine said.

When Katherine was fighting for her life in 2016, Elizabeth wrote her letter and called her mom her nurse because she takes care of what hurts and a superhero because “you know how to save the day.” Then she wrote her mother a poem and called Katherine her best friend.