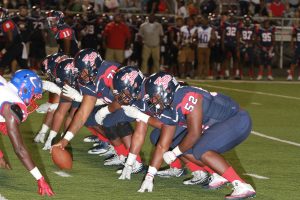 Coming off a huge win at Madison Central last week, the No. 4 ranked South Panola Tigers can officially clinch a playoff spot tonight when they again head south on I-55  to take on the Murrah Mustangs in a Region 2-6A tilt.

The game will be played at Hughes Field, located at 545 Ellis Ave. in Jackson.

This game marks the second meeting between the Tigers and Mustangs with the first coming in 2011 when South Panola won 42-14 in the second round of the playoffs.

Murrah enters tonight’s matchup sporting a 1-8 record with their lone win coming against Wingfield 26-12 in the first game of the year.

The Mustangs have been shutout in their previous four games and have scored a total of 61 points this season.

Darrell Foster and Quintin Jackson leads the Murrah offense while sophomore inside linebacker Trenston Sanders leads the team with 53 tackles.

Cory Johnson is second on the team with 48 tackles and three quarterback sacks. Senior linebacker Noah Blackmon has 40 tackles while defensive back Mekhi Mayweather has chipped in with 39 stops.

South Panola welcomed Janari Dean back to the line up last week as the Dandy Dozen selection ran for 157 yards and three touchdowns.

Dean had missed the last three weeks with a separated shoulder.

Quarterback Anterrio Draper threw for a season-high 256 yards and one touchdown in the win over Madison Central.

The junior has thrown for 1,308 yards and 19 touchdowns while rushing for 532 yards and seven touchdowns.

Ole Miss commitment Cameron Wright leads the receiving corps with 26 catches for 386 yards and seven touchdowns while Ricky Farmer has 16 receptions for 305 yards and six touchdowns.

Jaquailian Gillespie leads the South Panola defensive unit, and is ranked seventh in the state with 95 tackles to his credit.

Jordan Milton is second on the team with 57 stops and is tied with Tra’ Norwood with three quarterback sacks.