When the Tigers were ‘Hoosiers’ 40 years ago 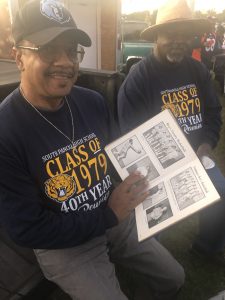 With barbecue smoke hovering, music blaring, and darkness descending on the field next to Dunlap Stadium Friday night, the South Panola Tigers prepared for a game with the Greenville High Hornets while their fans enjoyed the annual Homecoming tailgating festivities.

It was the perfect football weekend, and all Richard Draper wanted to talk about was basketball.

Draper and his classmates from the 1979 South Panola graduates went all out for the 40th year reunion over the weekend, kicking things off with a big tent and plenty of dishes on the tables.

Outside the tent, Draper and fellow Tiger alum Curtis Chapman reminisced about that year as he flipped through a 1979 yearbook someone had brought to pass around. Amid the laughter and stories, Draper was somber for a moment, recalling that season’s Tigers basketball team and their unique story.

“I love my teammates from that season, I really do,” Draper said. “Even though I went to college with something else, that season, and what we went through helped me the rest of my life, and I would say even today.”

What the team went through was straight out of the plot of the basketball movie Hoosiers, years before the movie was produced. The story began in the late fall of 1979 when the basketball team was about seven games into its season. 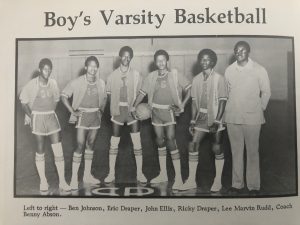 Coach Benny Abson was in the first part of his long career as a coach and educator in South Panola schools, and discipline was rule one at the high school.

Some of the players were caught breaking team rules in the parking lot before a game – Draper said he never cared to know what – and were dismissed from the team soon after.

“We were all shocked. We had a game the night we found out and Coach Abson came in the locker room and looked around at us. He asked if that was everybody and we said yes. He said, ‘Well, boys, this is your team for the rest of the season, so don’t get in foul trouble’.”

Draper said he and others learned valuable life lessons during the strange season. Lessons that he would later draw on in his business career.

“It didn’t take long to figure out that we had to work together. There wasn’t anybody on the bench to take your place. You knew that and you did your part the best you could. Absolutely that season has helped me in life,” said Draper, a Memphis resident who owns health care facilities for outpatient treatment of psychiatric disorders caused by drugs and alcohol.

The other four players left for the Tigers that season were Ben Johnson, Eric Draper, John Ellis, and Lee Marvin Rudd.

“The funny thing is that we weren’t a very good team before that happened. (They started the season 0-6 records show). Some of the guys were from Pope and Courtland and we were from up here, and it was like two factions on the team,” Draper said.

“After we started playing with just us five we went 11-7. A lot of tournaments, instead of getting put out in the first round, we were making to the championship game. We played with an intensity that was just different and it was a season we won’t ever forget.”

“We never could beat North Panola, though. Those guys were good and they were disciplined,” Draper recalled. “The difference was they focused on basketball up there like they focused on football at South Panola.”

Once that season, Draper recalled, the five teammates had a terrible first half, playing sloppy against Holly Springs. At halftime, Abson told the boys to stay on the bench, not allowing them to go the locker room.

“He said to stay right there and think about how bad we had played. People were looking at us and wondering why we didn’t go the locker room,” Draper said. “But, we clawed our way back from being down 10 or 12 and won the game with a last second shot. So I guess it worked making us sit on the bench.”

Draper sees three of his teammates from 1979 at least once a year, and is still reminded by others of that basketball season. “Sometimes people will ask me at different get togethers if I remember the year Coach Abson kicked off everybody but five off the basketball team. I laugh and tell him that, yeah, I remember it a little bit.”

Draper is serious again when he thinks about how sports at South Panola opened the door for a successful life for him. “Coach Abson heard I could run fast when I was in junior high and he got me to race Jimmy Lee Smith on this old dirt track we had back then and I finished ahead of him. From that time Coach Abson invested time in me because he believed I had something that could help me make something.”

The attention from Abson and others at the school led a high school track career good enough to earn him a college scholarship to the University of Southern Mississippi. Draper’s high school career was highlighted his junior season when he won the 1978 state championship in the 1-mile race.

“That was a great day. Me and Donnell Townsend went to Jackson in his parents’ big Oldsmobile and I won the state championship and Donnell came in third or fourth in the 100 yard dash. The thing was that the great Calvin Smith, he was born in Mississippi, won that race, and Donnell ran right there with him.  I won’t ever forget that,” Draper said.

Calvin Smith, of Bolton, had a tremendous career at the University of Alabama, went on to a professional career that included setting a 100 meter world record of 9.3 seconds in 1983 at the U.S. Olympic Festival in Colorado Springs.

Draper spent a year at Southern before transferring to the university then known as Memphis State University where he earned a bachelor’s in education. He has lived in Memphis since college, but keeps close ties to Batesville and his South Panola roots.

As the night grew black and the dew began forming, Draper finally surrendered the yearbook to classmate Dr. Michael Havens who quickly found himself in the 1979 football team’s group picture, but pointed out the absence of a baseball photo.

“At least the basketball team got their picture in the yearbook with five players, the baseball team’s not in here anywhere,” he joked with classmates.

Havens, who earned a baseball scholarship at Northwest Mississippi Community College, also remembered the special season the basketball team endured with no substitutes.

“Everybody knew Coach Abson meant business and that’s just one example,” Havens said. “We had a lot of good students and teachers, and I’m always glad to get to see them when we can.”

CUTLINE:  Richard Draper points to the photo of the South Panola basketball team in the 1979 yearbook. Coach Benny Abson dismissed all but five players from the team that season. Curtis Chapman (right0 and Draper were part of the Class of 1979 reunion this weekend. (Jeremy Weldon)

Playhouse has haunted fun on weekends