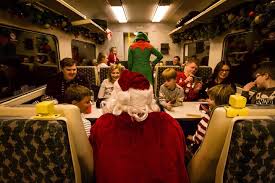 The Train to Christmas Town will begin its holiday runs Nov. 16 and preparations are well underway for the thousands of visitors the train experience will once again bring to the Downtown Square in Batesville.

Mayor Jerry Autrey said Monday most of the final details with the owners and promoters of the Train to Christmas Town have been worked out, and the city is planning a few extras for this year’s holiday train season.

Panola Partnership ordered a large inflatable snow globe that will adorn the Square, probably near the gazebo, and it was delivered Monday. Visitors will have an opportunity to have photos taken in the globe.

Follow the continuing on board story with Janice, a new friend; Jack; and of course Bumblebee the cuddly polar bear. Copies of the first and second book volumes will be available this season.

Ticket and schedule information can be found at www.batesvillechristmastrain.com.

When the Tigers were ‘Hoosiers’ 40 years ago