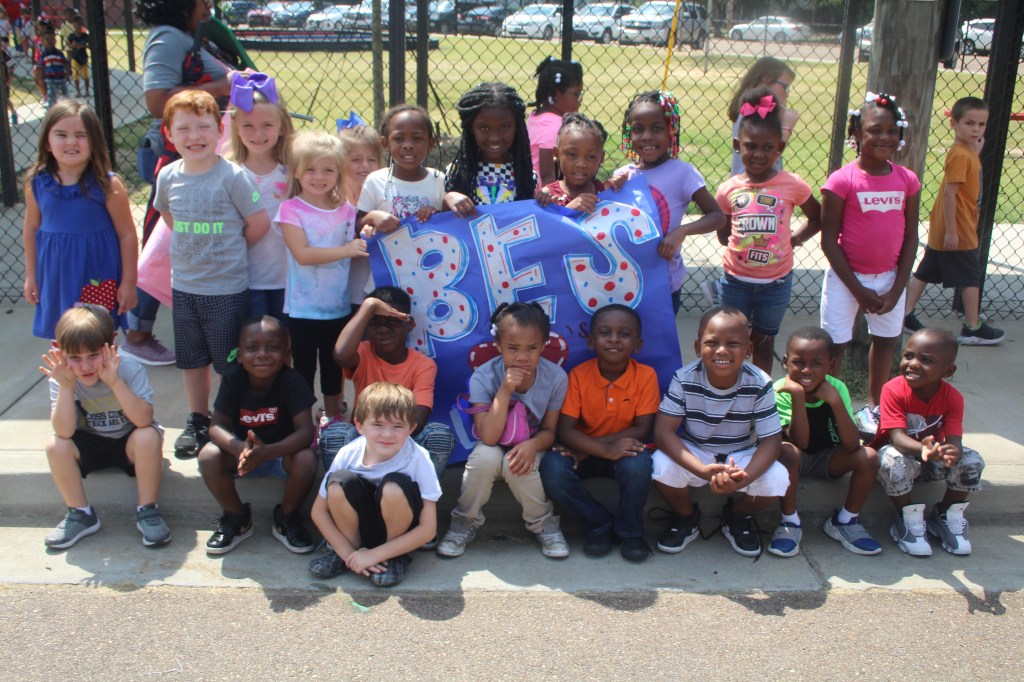 Hundreds of South Panola students lined streets in Batesville and Pope near their schools Friday afternoon to welcome the arrival of Memphis meteorologist Jim Jaggers, who brought his  fundraising bicycle tour through the county on his annual trip around the viewing  area of television station WREG Channel 3.

In sweltering heat, students and teachers cheered as Jaggers approached each school.  He made short speeches at all the schools, thanking everyone for helping in his annual fundraiser for LeBonheur Children’s Hospital in Memphis.

In his 14th year, Jaggers said the fundraiser has brought in almost $3 million dollars for the research hospital, mostly from coins and small donations  collected by students and school staff throughout the Mid South.

Batesville Elementary School has been a large collection stop for Jaggers for several years and last year the school raised the second most of any school participating with more than $6,000. This year’s total of $12,653.81 raised by BES will probably lead all donors when the final numbers are tallied.

Overall, Panola County made remarkable donations to the cause, far exceeding the funds  raised by Jaggers in Oxford and Lafayette County Schools.

In all, South Panola schools presented checks for $24,818.40 from its six campuses. The seven participating schools in Oxford and Lafayette raised $7,437.04.

“The South Panola School District has been such a great supporter for Go Jim Go! and all that we do for LeBonheur Children’s Hospital, and these students and teachers are just amazing,” Jaggers said. “We always have a wonderful time here meeting  everyone and the support from the administration is just incredible.”

Jaggers rides with a team of three other bikers dressed in colorful racing uniforms. They travel in a SUV from site to site and then ride bikes along the lines of cheering children with loud music booming from speakers, all designed to reward the schools with an exciting  event to celebrate the money raised.

The WREG crew began last Friday at Pope School, then traveled to Lafayette County for seven campus stops, before returning to Batesville about 1:30 p.m. for the city schools.

“You know what?” Jaggers shouted over the music at the Batesville Elementary event. “I tell people all the time in Memphis about this great little school down in Batesville, Mississippi  that raises tremendous amounts of money for LeBonheur. I tell them that even when their school burned down they still raised a bunch of money for Go Jim Go! and I want all of you to know that you have a very special school and the children at LeBonheur thank you so much.”

BES Principal Dr. Amy Sutton had a large check for $10,121.34 to present when Jaggers arrived, but late online donations pushed the final total about $2,500 higher.

Sutton said the school received donations from several individuals and business owners who have children at BES and teachers contributed to earn perks set up by the office. A large portion of the money was collected, like at all the schools, from students bring nickes, dimes, and quarters for the fundraiser.